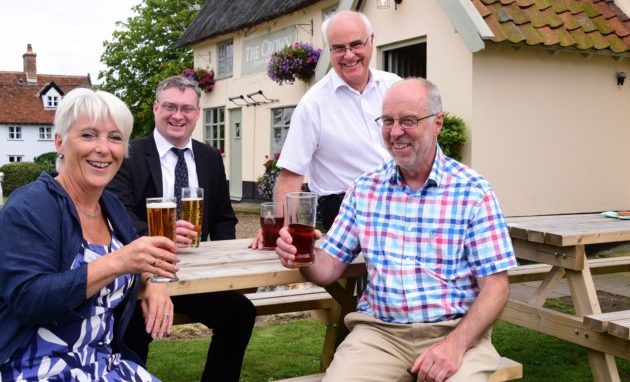 The Crown Inn, Pulham Market has been named South Norfolk Council’s Community Pub of the Year 2015.

The announcement was made by the judging panel in the fourth year of the awards in a ceremony held at the Council’s HQ in Long Stratton.

Jon Bingham, landlord of the winning pub said: “We are very proud to receive this award. It’s a fantastic feeling to know that our community has got behind us by nominating The Crown Inn. It’s not until things like this happen that you realise just how much of a difference a local pub can make in the community.”

At the ceremony four other pubs were also recognised as the best community pubs in their Neighbourhood Area and collected their winner’s plaques.

Councillor Martin Wilby, Deputy Leader of South Norfolk Council and member of the judging panel, said. “I would like to congratulate our worthy winner, The Crown Inn. This is the seventh year that we have run this competition and South Norfolk Council is still the only Council in the country supporting its pubs like this.  All of these pubs are winners. They all stood out for the great things that they are doing in their communities and it was very difficult to for us to decide our overall winner.” The Neighbourhood winners were: The Railway Tavern, Framingham Earl, (Eastern Rivers), The Queens Head, Hethersett (Northern Rivers), The Kings Head Woodton (Tas Valley) and The Green Dragon, Wymondham (Wymondham & West). The Crown Inn Pulham Market (Waveney Valley) The Crown Inn will also receive £1000 to put towards a community event.

Terry Stork, Pub is The Hub advisor for the Anglia Region said: “This competition really highlights the tremendous value local pubs bring to the community with all the pubs going that extra mile and the publicans acting as a catalyst to get communities to pull together for the needs of their neighbourhood. South Norfolk District Council should be congratulated for running this inspired competition that showcases licensees and the fantastic work they do for their respective communities. This is a great example of inspiring and promoting the work of licensees in their communities.”