Thousands of rural pub customers in East Anglia and the South East are enjoying a chance to see live theatre courtesy of a unique project devised by Creative Arts East and Applause Touring Theatre Company, supported by Pub is The Hub.

The Inn Crowd is a three-year project that started in November 2016 and aims to reach and engage with non-traditional arts audiences and to enrich the cultural lives of people within rural communities.

One year into the project they have been able to undertake forty-five performances at thirty pubs in Kent, East Sussex, Norfolk, Suffolk and Cambridgeshire, with fifteen identified for forthcoming events and a target of seventy by 2019.

The performances are specifically designed for a pub audience to take into account space available, the pub’s own operation and technical requirements while the pieces themselves are chosen and developed with help from the Writer’s Centre Norwich.

Feedback so far says that 67% of audiences were likely or much more likely to attend another event while the pubs themselves have reported a 60% uplift in takings for the evenings of the performances.

Bernard Lee, Pub is The Hub’s regional advisor in Cambridgeshire attended one of the performances and said: “We kicked off the first of five live theatre performances for Cambridgeshire last night with a production called ‘Around the world in eight mistakes’ performed by Sophia Walker. It was an incredible story full of humour and surprises played to a full house. This production was first trailed at the Edinburgh fringe and went down a storm with the customers of this charming country inn. It was a first for The Bull and judging from the feedback they will be looking to provide more live theatre events in the future.”

Comments from audiences in feedback forms include:

“A cultural talk in my local – what’s not to like?”

“Ideal setting for this kind of event. So great to have this sort of innovative and original performance in our local pub.”

Deborah Lefort from the Star Inn at Waldron in East Sussex commented: “A complete joyous surprise. Unusual for a village but surprisingly fabulous. The script was brilliantly delivered, clear, moving and though-provoking. Everyone agreed it was an unexpected pleasure. It brought the community together to enjoy an experience that was new to many of them and on their doorsteps. They all had a great time and are keen to attend more.”

She added: “It brought the community together in a happy and positive way. It also means that the locals (particularly the elderly) get to see live theatre.”

Ian Anderson from the Old Vine Inn at Coulsey Wood in East Sussex said: “We are still getting rave reviews about last Wednesday. The organisation and performance were excellent along with feedback from our customers.”

There is a short film about the Inn Crowd performing at the Banningham Crown in Norfolk available to view here.

The photograph shows Jeanie Feneron  from the Banningham Crown in Norfolk with non other than William Shakespeare! 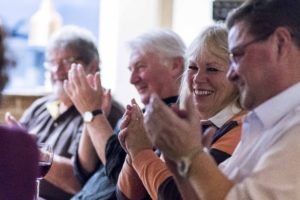 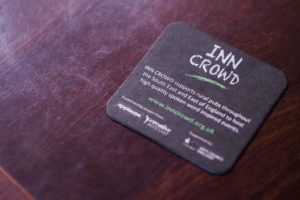