When the village café in Lingwood near Norwich closed recently, the owner and licensee of the King’s Head, Terry Holt, stepped in to relocate it to his pub.

Now the King’s Head boasts a café with improved disabled access to the café, the beer garden and new toilets. Since the improvements Terry has introduced a senior citizen’s luncheon club with the aim of reducing isolation and loneliness for the more vulnerable customers and making the King’s Head a true village hub.

When Terry was able to secure £4,000 grant funding via rural pub champions Pub is The Hub and Norfolk County Council’s Community Services Fund towards the cost of the alterations he decided to go full-steam ahead with the project. It was a difficult task because of the many different floor levels and also involved some major structural alterations, including closing the main roadside entrance to make way for the new toilets.

Terry said: “Once you have been through the door and realise it is not a pub which is loud and you are made to feel unwelcome, people want to come back. The people at the café know we are friendly and it just works.”

Pub is The Hub’s regional advisor Terry Stork added: “Terry didn’t waver in the large task he set, doing much of the work himself. Now thanks to all his hard work, Lingwood has a café once again and wheelchair bound customers can access all areas.” 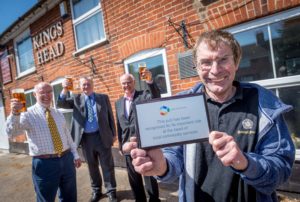