The UK’s longest running pub under community ownership is celebrating its twentieth anniversary on 1st July 2017 with a big village party.

The Beauchamp Arms in Dymock, Gloucestershire was taken over by its local community in 1997 when the last remaining pub in the village was put up for sale and threatened with closure.

The Parish council took the then unusual step of applying for a loan from the Public Works Loan Board to purchase and renovate the pub for around £160,000 where rental paid by tenants would be enough to cover the monthly repayments.

Following approval (as legend has it) by the recently appointed Secretary of State for the Environment, John Prescott, the Parish Council took over ownership of The Beauchamp Arms in May 1997 working with a management company running the pub. Much of the refurbishment work was done by the local community donating their time, skills and resources at the time.

The present tenants of the pub, John and Linda Griffiths have been running The Beauchamp Arms for fifteen years with great success. That success, says John, is down to the Parish Council operating at arm’s length and letting the couple run the pub as they see fit, even when it comes to making tough decisions. John said: “We have a meeting with the Parish Council once a year to discuss maintenance issues and future plans but otherwise they have given us space to run the business ourselves.”

In May this year, Terry Bell the current Chairman of Dymock Parish Council paid the final repayment for the 20-year loan. Although not on the Parish Council at the time he confirmed that support for the scheme by residents was overwhelming; “the Parish Hall meeting was rammed” and that they are now in the enviable position of working out how they will spend the rental income from the pub. He said: “We are having a meeting soon but future income will go towards general upkeep for the building and towards other community projects in Dymock.”

While the loan was being repaid, ‘Friends of the Beauchamp Arms’ (FOBA) was set up as the pub’s financial safety net, raising funds through village events to support the maintenance, repairs and small building projects at the pub. Ian Brown who heads up the group said: “We hold at least four big village events each year with the proceeds of three of them going towards the pub and the fourth is given to charity. The last major job we paid for was replacing the bar.”

Ian added: “The purchase and running of the pub has been entirely supported by the community throughout the twenty years. Situated, as it is by the village green and flanked by the church and parish hall it has become the spiritual, economic and social hub of the village. I have to take my hat off to the Parish Council, it was an inspired idea.”

The Public Works Loan Board (PWLB) is a statutory body operating within the United Kingdom Debt Management Office, an Executive Agency of HM Treasury. PWLB’s function is to lend money from the National Loans Fund to local authorities, and to collect the repayments.

Pub is The Hub provides advice and support to communities who are thinking of taking on their local pub. They offer an advice pack for communities when embarking on such a venture that is available through calling the Pub is The Hub office on 01423 546165. It is also in a downloadable PDF format on their website at https://www.pubisthehub.org.uk/community-ownership/ . 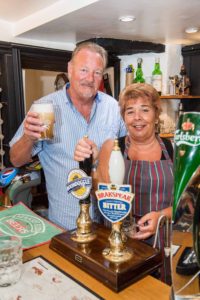 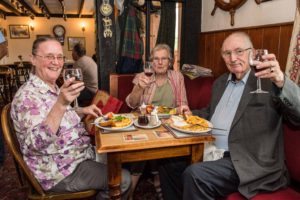