Rural pub champions, Pub is The Hub helped to open a new community cinema in the recently restored Boot Inn at Freston yesterday.

The 15-seat cinema has been created in the outbuilding next to the pub car park in a classic art deco cinema style. Films shown will have a 20-minute interval halfway during which guests can visit the bar or have drinks and food delivered.

The film schedule is being created by local film enthusiasts and will be based around four regular showings each week as well as being available for private showings, children’s parties, presentations and talks.

The original building at The Boot dates back to the mid seventeenth century but the pub had been closed since 2010. It only re-opened earlier this month following a £300k refurbishment with Mike Keen as the new leaseholder at the pub.

Mike wants to create a strong community involvement for the pub and see the cinema as a great way of connecting with people. He said: “I didn’t want to ruin the atmosphere in the pub with a TV but there is still a place for watching important events – such as World Cup matches – and creating a unique community space that requires audio visual support for local societies and clubs.”

The first feature film will be shown at the cinema will the World Cup football classic, ‘Escape to Victory’.

Terry Stork from Pub is The Hub said: “Aside from re-opening a valuable community asset in the pub, the added appeal of a community cinema will help both young and old within the village to socialise and also to appeal to the wider community.”

Since late last year Mike has been keeping local up-to-date with developments with a blog while he established a kitchen garden, a wedding paddock and brewery along with chickens, ducks, snail, mushrooms and bees.

A couple of minutes from the A12 and A14, a stone’s throw from the River Orwell with views over the iconic bridge The Boot stands at the gateway to the Shotley Peninsula – ideal as a base camp for ramblers & cyclists.

Photograph above shows Terry Stork from Pub is The Hub toasting the new cinema with Mike Keen, the licensee. 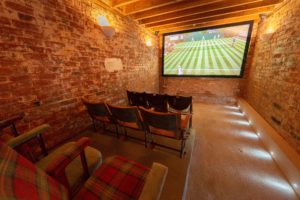 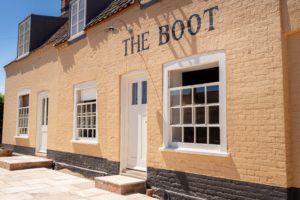 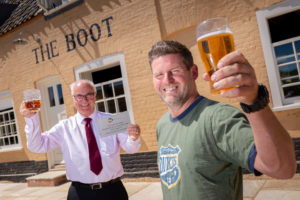