Philip Hall OBE officially opened the new tearoom and deli ‘Foodie Bouquet’ along with other essential community services at The Wheatsheaf at West Beckham in Norfolk.

Pub is The Hub’s programme of funding for rural pubs has helped to bring Daniella and Stephen Moorby’s vision of a community pub providing a whole range of services to fruition.

With a grant of £4,000 from the Pub is The Hub’s Community Services Fund the shop will sell locally sourced produce wherever possible, including fresh fruit and vegetables, homemade cakes, freshly baked bread, preserves, chutneys and homemade ready-to-cook meals. Later in the year, the tearoom will be providing some digital training and will set up a Senior Citizens Luncheon Club.

Stephen and Daniella are encouraging volunteers from the village to help to staff the shop and will open from 9am to provide breakfasts through to 3pm. Once the shop closes at 3pm, customers can still access provisions from the shop through the pub.

Stephen Moorby said: “We want to be a part of village life as much as possible and that means providing additional services at times when we are open for the pub and accommodation business. We are happy to be able to offer our locals a service that would save them a six-mile round trip to the nearest convenience store.”

Both Stephen and his wife Daniella come from an extensive corporate level hospitality and retail background and have worked within some of the most luxurious hotel brands worldwide.

Terry Stork from Pub is The Hub commented: “Since taking over the pub in December 2014 Daniella and Stephen have developed it into an outstanding business serving top class meals and providing superb accommodation. Their enthusiasm shines through and I know that the surrounding community will enjoy the benefits that their new venture brings.”

Philip Hall OBE, who is a regular patron of The Wheatsheaf, has a lifelong and ongoing experience in the environmental sector and was awarded the OBE in 2000 by the British Government for Services to Conservation and Human Rights in Nigeria. In 2014 was directly instrumental in establishing the North East Norfolk Bird Club of which he is the President. 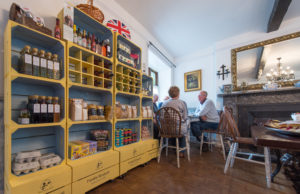 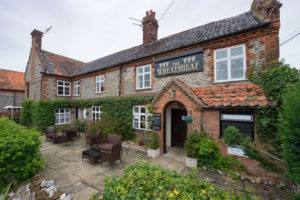 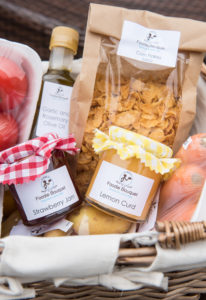