The Government’s Chief Secretary to the Treasury, Liz Truss MP was on hand to officially open the new mini kitchen and café at the community owned and run Fox Inn in Garboldisham last week.

The new kitchen and café project was supported by rural pub champions, Pub is The Hub, who gave advice and support to the group as well as accessing a grant through Norfolk County Council to support the cost of the project.

As the local MP for the area, Liz Truss agreed to conduct the opening following her support of the villagers in their goal to buy and take over the pub – a feat that they achieved in October 2016. In officially opening the new facilities she commented on how much hard work all the unpaid volunteers had done and how pleased she was to be there. She went on to comment: “Having seen the pub in its dilapidated state and the transformation that has taken place means that the pub will be more sustainable, bringing more people into the pub and café to socialise.”

Committee member, Janet Hance, organises the rotas for the volunteers who work as bar staff, cleaners and builders and she said that the kitchen will now enable them to build on a daytime café trade. They plan to have another coffee morning on 17 August from 10am to 12 midday and then hope to increase café trading from there on.

The 17th Century Grade ll listed Fox Inn occupies a prominent position at the main crossroads in Garboldisham, and had been closed for 10 years until the community raised the funds to purchase the pub. During the period of closure the pub suffered badly from both fire and flood meaning the whole fabric of the building needed major structural repairs, however certain parts of the building have been restored enabling the pub to open and now a new mini kitchen and café have been created so that it becomes a social hub for the villagers and wider community.

Regional advisor for Pub is The Hub, Terry Stork commented: “This group have been tireless in their efforts to maintain and develop The Fox. The addition of a kitchen and café means that they can support their community whilst improving the overall viability of the pub for the long term. I wish them the best of luck.”

The photograph above shows Chair of the Fox Inn Committee, Wendy Johnston with Liz Truss MP, Terry Stork from Pub is The Hub and Ian Skipper, a Committee Member 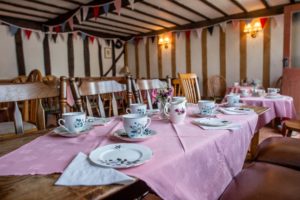 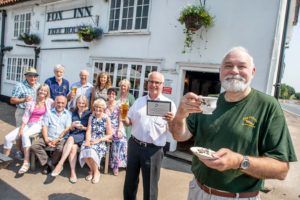 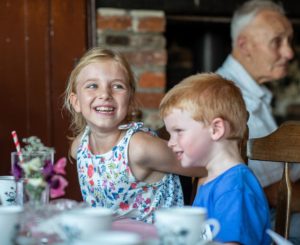