Raising over £1,000 in the process, the extreme running and walking race took place in the Northern Italian province of South Tyrol/Alto Adige and follows a mountain trail the “Hufeisentour” over a 69km, 13,000 ft climb. Stephan completed the tricky course in 16 hours and 55 minutes with the cut off being 21 hours.

A delighted Kofler commented: “It was one hell of challenge so I’m delighted to have conquered it and raised some money for Pub is The Hub which continues to do fantastic things for the pub sector.  Our brand began its UK journey in the noble British pub thirty years ago, so it’s great to be putting something back.”

Krombacher’s Sam Houston helped raise over £1,000 for Pub is The Hub last year after completing the Frankfurt Marathon.  £400 of the money raised was used to provide the Stoke Canon Inn near Exeter with a projector and screen for community events and talks.

The rest of the money raised was recently donated to the School Boy Inn in Norton, South Yorkshire which launched its community shop and post office on the 5th August.

John Longden, Chief Executive for Pub is The Hub said: “We can’t thank Stephan and his team enough for their hard work and the combined 100km they’ve clocked up in the name of Pub is The Hub. The launch of the School Boy Inn’s shop was a huge success and the money provided by Krombacher was vital in providing confidence and support to Kirsty and Andy to give the project a go.  These additional funds will go towards several other diversification projects to support local services through the local pub so thank you Stephan and prost!” 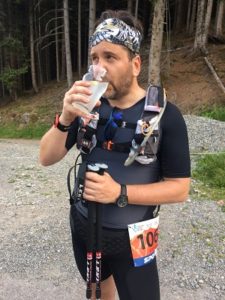 Above: Stephan Kofler on his challenge.