A multi-award-winning pub in Derbyshire has opened a farm shop and delicatessen with support from rural pub champions, Pub is The Hub.

The Saracen’s Head in Shirley near Ashbourne opened the Church Lane Deli at the pub as an essential new service for the village and surrounding area and is open six days a week and staffed by two new employees.

The Saracen’s Head, a Greene King pub, has been run by Robin and Terri Hunter for twelve years collecting numerous awards during that time, the most recent being Derbyshire Life Pub of the Year 2017 as well as being listed in the 2018 editions of the Michelin Guide and Harden’s Best UK Restaurant Guide.

With such a talent and interest in specialist food and drink the couple began to research into the idea of opening a shop in a rear outbuilding. Robin made contact with the local advisor for Pub is The Hub, Hugh Wilson, and began to make plans. In turn Pub is The Hub were able to offer advice and the promise of a small grant of £3,000 from the Community Services Fund to help towards the cost.

In typical fashion, life and work got in the way so it was another three years later that Robin began the task of converting the outbuilding into the shop they had dreamed about – with all of the building work done by himself whilst still maintaining the long hours associated with an award-winning gastropub kitchen.

When Church Lane Deli opened last weekend to around fifty local residents from the village and surrounding community it represented the conclusion of months of hard work by the couple. It is open every day except Mondays from 8am to 4pm, the deli will be staffed by part-time positions, creating two new local jobs.

Filled with speciality foods and the hall-mark Saracen’s Head take-away meals, the Church Lane Deli also stocks fresh milk and dairy items; local fruit and vegetables from Field Supplies in Etwall (along with some grown by local customers); home baked goods such as bread, cakes and pastries, as well as pork pies by Owen Taylor Butchers of Leabrooks in Alfreton; ice cream from Daltons in Wootton and local fish supplier RG Morrison and Sons will park at the deli for half an hour twice a week at 11am on Tuesdays and 12 noon on Fridays.

Robin Hunter said: “We didn’t set out to be a corner shop – we are a specialist food shop where you can buy fresh local essentials. We have already had a lovely reaction to this new venture from our local residents and customers and we want to thank Hugh and Pub is The Hub for their support and advice, along with the very welcome contribution from the grant.”

Hugh Wilson from Pub is The Hub commented: “Robin and Terri have created a very special new service for local people and visitors in an unused outbuilding that complements the pub whilst employing two more local people and providing an outlet for local suppliers. They must be applauded for their high quality scheme.”

The photograph above shows Hugh Wilson with Robin and Terri Hunter outside the Church Lane Deli. 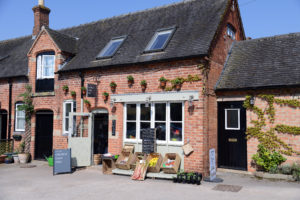