Vanda Pera, publican of The Crown at Capel, Surrey, shares how church services, community groups and linking with key community figures have helped her support local people at risk of social isolation

The passionate landlady of Star Pubs & Bars’ The Crown Inn, www.thecrowncapel.co.uk, and her trusty sidekick Gladys the bulldog (who even has her own blog and email address!) continued to be at the heart of their local community throughout the Covid-19 pandemic lockdowns. Initiatives Vanda put on to help support locals included ‘Silver Surfers’ £5 meals for the elderly, delivering takeaway meals to villagers by bike and hosting weekly virtual events including quizzes, gin tastings and pub get-togethers. 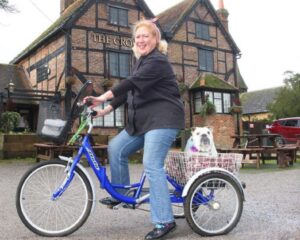 Vanda, who during lockdowns transformed the previously unloved boozer to create a food-led pub for all with an enticing garden, says: “Through our online events we helped foster many friendships, with 70-year-olds and 30-year olds connected through a Zoom craft group  now building on this to create a bigger group at the pub.”

She adds: “Pubs like The Crown Inn are much more than places to have a pint and a meal, they’re hubs of their communities and a lifeline for many, providing somewhere for people to enjoy what might be their only social interaction for the day or even week.”

A pub with ‘Open Arms’

Such is the strong focus of Vanda and The Crown Inn in helping to tackle the growing issue of societal loneliness that the pub featured in Heineken UK’s ‘The Open Arms Report, Open arms: the role of pubs in tackling loneliness (lboro.ac.uk) produced by Loughborough University, which launched earlier this year. Vanda was also recognised in Heineken UK’s 2021 ‘Brewing Good Cheer’ campaign Brewing Good Cheer | Heineken UK, as one of 100 publicans helping to support their local communities and combat loneliness, with £150 given to the pub for them to donate to a local charity.

When she became publican of The Crown Inn Vanda, who has worked in the pub industry for 30 years, wanted to create a pub positioned at the heart of the local community after getting disillusioned working with publicans who only cared about the bottom line. 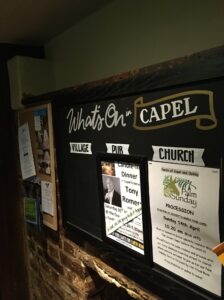 She says: “Some publicans just look at people as £££s and it shouldn’t be like that. I’m a passionate, old school publican who makes introductions, chats to people and connects people. Connecting people just happens organically, as through my conversations and local connections I’m alive to people who may need to connect with others.”

She adds: “I encourage people to have a chat. There are four ladies who met through the pub who all have different qualities but have become great friends. Much of it is about making sure people are comfortable and happy and they then get chatting.”

Among individuals Vanda has linked with to help identify people in the local community who may need support are the local mayor, vicar and councillors. She says: “I get to hear about what is going on locally and tell them what we are doing at the pub so they are able to highlight activities to those they feel may benefit from coming along.”

When she first took over the pub, to help create connections with locals, Vanda went to church and other local events and got to know the people behind different community organisations and groups. She says: “If they ask me for something I say yes. People often say, “I don’t use the pub but can you….”.  But when they come in for a meeting or group,they will often return to have a drink or a meal as they have seen what a lovely environment and atmosphere we offer.”

She adds: “I blush when people praise me and I just say to people I don’t need any thanks, just make sure you support the pub.”

Vanda is also the secretary of Capel Village Memorial Hall which has also helped to connect her with a wide range of villagers. She also ensures she chats to people walking past the pub and always smiles, says hello and talks to parents who use the pub’s car park for school drop offs.

She also gives a warm welcome to people moving to the village. She says: “When people are moving here they will often pop in to see what the pub is like and I always give them my card and say follow bulldog Gladys on Facebook and point them in the right direction of anything they are looking for.”

Capel’s Café Church is also hosted monthly at The Crown Inn, which provides a more informal setting for worship, with the event starting with attendees having breakfast and enjoying reading the newspapers, followed by a service with non-traditional church music. Services are held in the pub’s garden in the summer and inside in the winter. Vanda says the local vicar has been great in helping identify and introduce people to the pub who might need some support.

She also has a strong relationship with members of four local walking groups. “We see them in the car park before they set off and take their orders for drinks. We always promote the walking groups to new people in the village as they are a great way to meet others,” she says,

The Crown Inn also hosts a Monday Gin Club, regular ale clubs and Wednesday boules and wine nights, which Vanda says are inviting to all, lots of fun and a good way for people to meet others.

She says: “We have a widower and a group of widows who come along, who we call his harem. They said I don’t like gin. But we say it’s not about that, it is about coming out and seeing some different faces and enjoying some company. They really enjoy it.”

Other regular events Vanda hosts at pub include coffee mornings, including to fundraise for charities. She says: “I get people to wear badges saying ‘I’m new’, ‘I have just arrived’ etc. I mix it up and get people to sit on different tables so they can meet others.”

Other occasions Vanda says are popular with locals who live alone are Sunday roasts, with people often lacking the motivation to cook this for one and also barbecues, which the pub offers as part of live music ticketed events.

Supper clubs were also popular before the pandemic, with customers sitting in big tables of ten, with singles and couples all coming together to make connections.

To help encourage people to join in activities at the pub, transport is organised, either with volunteers going to pick people up or the pub’s team ensuring people are aware of return bus times or arranging a local taxi man to pick people up. 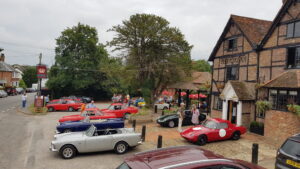 Among effective ways Vanda shares what’s on at the pub are a weekly newsletter and calendar of events on the pub’s website and a blog and page adverts in the parish magazine. Posters about activities are also put up at bus shelters in the village and in local shops.

Connecting over a coffee

Vanda is now busy working on another addition to The Crown Inn which will also help bring people together. A 20-seat community coffee shed in a converted shipping container, overlooking the pub’s car park is planned to open this year. The shed, will also feature a weekly changing pop-up shop for local retailers such as the florist and wet fish supplier to sell their goods. Vanda says: “The idea is people can come down, have a coffee and enjoy picking up their goods. It also helps to support other local businesses.”

Tips to other publicans: